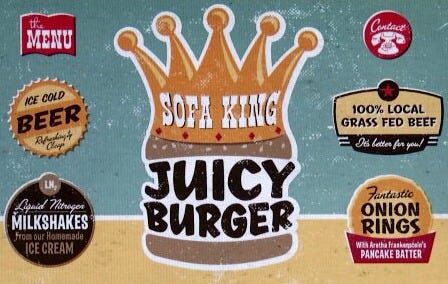 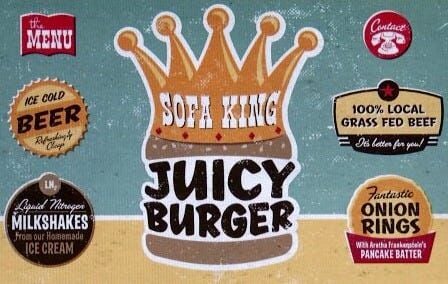 RED BANK, TN (WRCB) -- The sign on a Dayton Boulevard, long under construction, but soon-to-be eatery, is shrouded, for now. But the business's web site is up and the name has people talking, after they have read the name to themselves a few times. Sofa King Juicy Burgers.

"It's kind of an odd name," said Carolyn Latiff.

Channel 3 caught up with Latiff as she dined at the Waffle House next door. She smiled because she was already hip to the name and what we were about to ask.

In the corner, though, was a group of students from Baylor. Our copy of the Sofa King Juicy Burgers homepage was the first they had seen of what is going into the building now painted beige and showcasing a life-sized silhouette of a steer.

Michael O'Connor took our page and read it. Read it again; a few more times and a little faster, and then, "Oh, yeah. I got it," he said. "I get it!"

Red Bank Mayor John Roberts, named to that position only a week ago, did not give Sofa King Juicy Burgers another thought, until a Sunday editorial in the Chattanooga Times Free Press was brought to his attention.

"It took me a while to pick it up," he admitted. "I had to ask some people and say, 'I just don't get it.' Maybe I'm a little slow. I know, it's coming back from Thanksgiving, all the turkey I ate, so maybe my brain is not processing this stuff."

Call it controversial, call it a harmless play on words...maybe if you read it out loud.

The guys behind it have had great success with Crust Pizza, just around the corner, and Aretha Frankensteins on the North Shore. This venture promises local grass-fed beef and milk shakes made with liquid nitrogen.

And about the name... "I know what it's about," Latiff said. "There's a sofa in there, so I know it's going to be, that's the reason they named it that."

There will be a sofa; a big one. So patrons can sit and eat the juicy burgers.

But, is the name, even said with a wink, too edgy for Red Bank? The intersection is the entrance to the town's business district and attracting new business is key to a brighter future.

How will this go over with locals and those looking to put down roots?

"I think they're gonna laugh about it, " Latiff added. "It's catchy. It's got a catchy ring to it, so I think they'll enjoy it."

"Yeah, that's bold and they're making a statement," agreed O'Connor. "So, I should at least go try it and see; see how it tastes."

Mayor Roberts says he believes the issue has been blown out of proportion.

"If they put a big bad word on the billboard, then that would raise a big fuss," he explained. "But, it's definitely by how you look at it. You know?

"I hope they're not pulling a fast one on us, but I don't think they are, really," said Mayor Roberts. "They seem like good, legitimate business owners for our city."