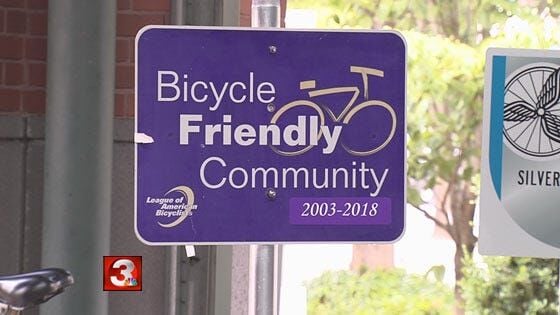 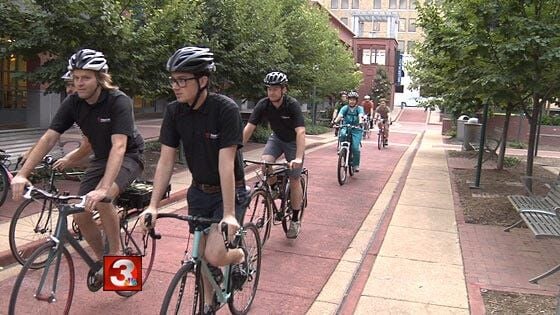 Chattanooga police have a new device to help drivers and cyclists share the road.

The device measures the distance between a car and bicycle. The department used National Bike to Work Day to show off the one-of-a-kind technology.

Chattanoogans are trading their four wheels for a set of two.

City leaders are trying to keep up with the rapidly growing cycling community by adding bike lanes and boosting safety enforcement.

But cyclists like Pearl Pangkey say there's still a long way to go.

“I don't think there's enough bike lanes and I think we just have to educate the public,” she said.

Pangkey, who started biking to work earlier this year, says she recently had a dangerous encounter with a driver following too close.

“I was going really slow because there was traffic and I was peddling and I hear this really loud engine sound and I turn and there's this big black SUV right beside me. I could have reached out and touched his hood,” she added.

“Where this is a collision between a cyclist and a motorist, the cyclist is almost always going to lose in that collision. They're going to get hurt,” Chattanooga Police Officer Rob Simmons said.

Simmons, a 13 year veteran, is one of 12 members of CPD's Bike Patrol. He says departments across the country have trouble enforcing the 3-foot law, which mandates drivers keep a safe distance from cyclists.

“It's an opinion of an officer that sometimes will hold up in court and sometimes won't because judging distance from a distance is very difficult,” Simmons added.

Simmons teamed up with an engineer in Texas to create a device that measures the distance between a vehicle and cyclist using radar.

“[The signal will] bounce off the vehicle and then come back and I'm given a distance in inches of how far away the motorist was when they passed,” he added.

The goal: to enforce the law and educate both drivers and riders.

“As cyclists, we need to be predictable to the motorists and the only way to be predictable is to follow the laws that are set up. We are to act like vehicles and we have all the rights and responsibilities as vehicles,” Simmons said.

The radar unit was paid for by the Friends of Outdoor Chattanooga, a cycling advocacy group.

If you are cited for violating the 3-foot law in Chattanooga, it's considered a misdemeanor, meaning you would be required to pay a fee.