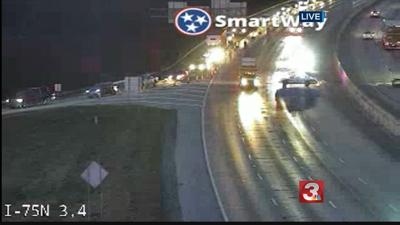 UPDATE: A three-vehicle crash on Interstate 75 northbound Friday morning claimed the life of a 49-year-old woman.

Chattanooga police say that the woman was driving her GMC north when the vehicle became disabled. She left the vehicle in the lane of travel and then walked over to the median.

That's when a second vehicle, a Toyota Corolla in the same lane, was unable to avoid the GMC and struck it in the rear.

A third vehicle, a Toyota T100 that was also traveling north, saw the brake lights ahead and swerved left to attempt to avoid the crash. That third vehicle than struck the woman, who was still standing by the median.

She was pronounced dead on scene by Hamilton County EMS. The driver of the second vehicle was transported to the hospital with minor injuries.

Several other vehicles were involved in the crash, but no other injuries were reported.

Chattanooga Police ask anyone with information regarding this incident to call 423-698-2525 or submit a tip via the CPD Mobile App. You can remain anonymous.

The traffic backup went westward on I-24 past Chattanooga's ridgecut, and southward on I-75 into Georgia.

Chattanooga police say the crash involve multiple vehicles and there may be injuries to those involved.

Northbound traffic has been routed onto East Brainerd Road, causing a secondary traffic problem for drivers.

There's no word on when the road may be reopened to traffic. Plan on an alternate route.

WHAT THE TECH? Tips for improving slow WiFi speeds